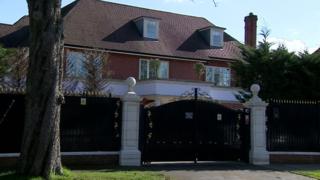 The BBC has won a challenge to identify a London mansion at the heart of the latest Unexplained Wealth Order (UWO).

The property is the family home of one of the members of Kazakhstan’s political elite, Nurali Aliyev.

The home on The Bishops Avenue, Hampstead – known as “Billionaires’ Row” – is owned by offshore companies.

It is one of three homes worth more than £80m owned for the benefit of Mr Aliyev and his leading Kazakh politician mother, Dariga Nazarbayeva.

The National Crime Agency suspects all three of the mega properties in London were bought with riches embezzled by Mr Aliyev’s notorious and now dead father.

Rakhat Aliyev once styled himself “Godfather-in-law” and was accused of crimes including murder, before his own death in prison.

Mr Aliyev and Dr Nazarbayeva have denied all wrongdoing – saying they can prove independent and legitimate wealth for their UK property investments.