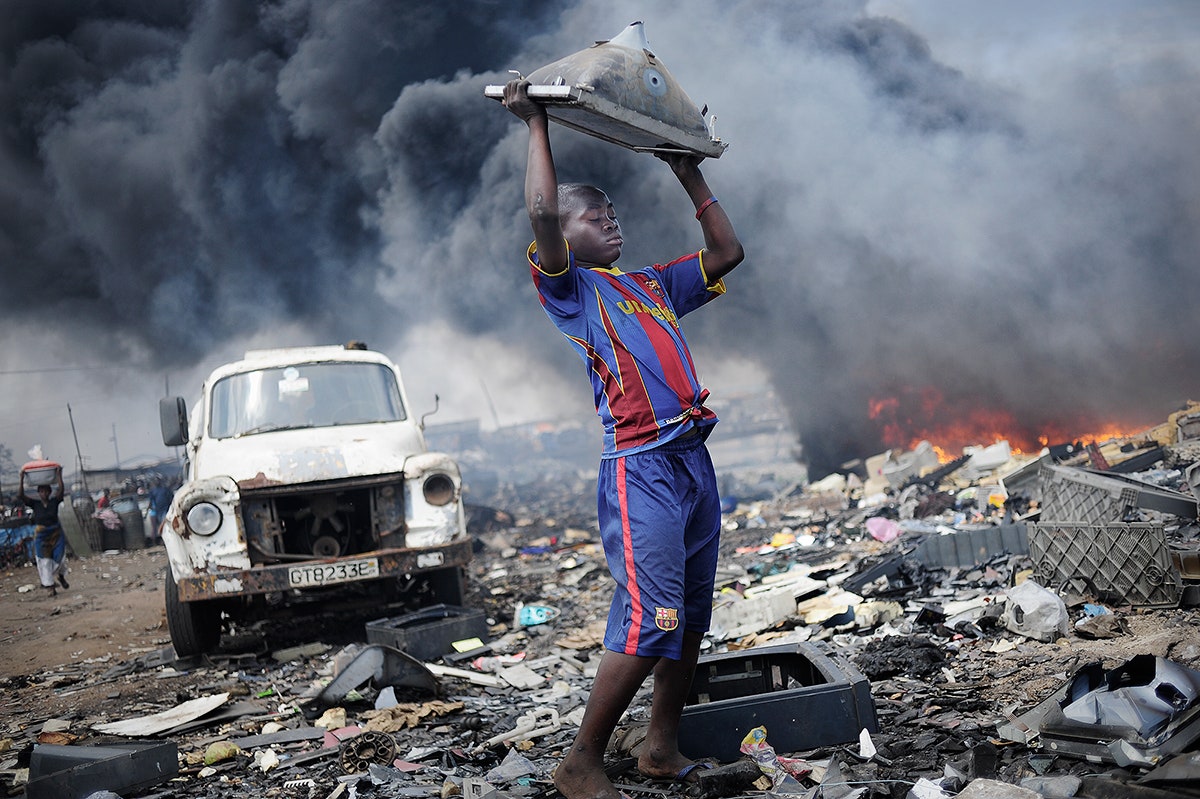 ACCRA, GHANA – This investigation puts the spotlight on the dumping of e-waste, particularly discarded colling appliances by Europe’s e-waste exporters in Africa in contravention of EU’s law and the Basel Convention while port officials in Europe turn a blind eye to the shipment of these discarded appliances.

Garbage Out, Garbage In: How Europe’s e-waste problem is a burden on Africa (Part I)

ACCRA, GHANA – The 1st story puts the spotlight on the dumping of e-waste, particularly discarded colling appliances by Europe’s e-waste exporters in Africa in contravention of EU’s law and the Basel Convention while port officials in Europe turn a blind eye to the shipment of these discarded appliances.

It shows how several e-waste recycling organisations in Europe, particularly in the United Kingdom have previously been engaged in the illegal shipment of e-waste to countries like Ghana, Nigeria and Tanzania. Experts have described the illegal shipments, as “an EU waste management regime on the backs of the poor and vulnerable”.

The investigation also shows that  recent EU Guideline on the Transboundary Movement of WEEE led by Germany introduces a “Repairable Loophole” which risks undermining gains of the Basel Convention and threatens to, “guide unscrupulous traders to export all manner of hazardous broken or untested consumer electronics outside of the control procedures of the Basel Convention simply by making a claim of export for repair“.

The story reveals the negative impact that harmful refrigerants found in discarded cooling appliances have on climate change and the environment – having the capacity to warm the atmosphere thousands of times greater than carbon dioxide, and already accounting for around 10% of global CO2 emissions.

It also highlights how the Ghanaian government has made progress in dealing with the dumping of cooling appliances on its shores despite its failure to build a functioning recycling plant at Agbogbloshie – the ‘graveyard for Europe’s e-waste’ in Ghana after several years of promise.

The journalist Gideon Sarpong speaks to environmental experts, import and export representatives, government officials and the academia to understand what is at stake, how Europe’s e-waste problem has become a burden on many African countries; its impact on the climate and recent efforts led by Germany to undermine the Basel Convention and maintain the status quo of dumping of e-waste in developing countries.

Prohibited by law, but in practice allows the import of hazardous gas refrigerators (Part II)

DOUALA, CAMEROON – The 2nd story focuses on the contrast and paradox between the law regulating the importation of cooling appliances into Cameroon. This investigation focused on fridges and freezers imported into Cameroon in violation of the regulatory provisions governing this sector of activity.

If the administrations, notably those of the Customs and the Environment, have not been very forthcoming on the phenomenon, indiscretions lead one to believe that it is a matter of administrative tolerance in defiance of the lives of citizens. This is all the more true since the other actors we met are aware of the dangerous nature of the gases contained in these devices. Even at the level of handling by scrap dealers, no precautions are taken, even less so when it comes to abandoning them in nature as part of an archaic and even more dangerous recycling process.

In view of the regional and international provisions examined with a fine-tooth comb during this work, it can be concluded that the regulatory and legislative framework is well established, but the administration or those who embody it are not aware of the real dangers. This is known and decried in the sector, particularly by environmentalists and associations of refrigeration and air conditioning professionals that we met. What is needed, as they all say in chorus, is a rigorous effort on the part of the administration and a major campaign to raise awareness of the subject among stakeholders.